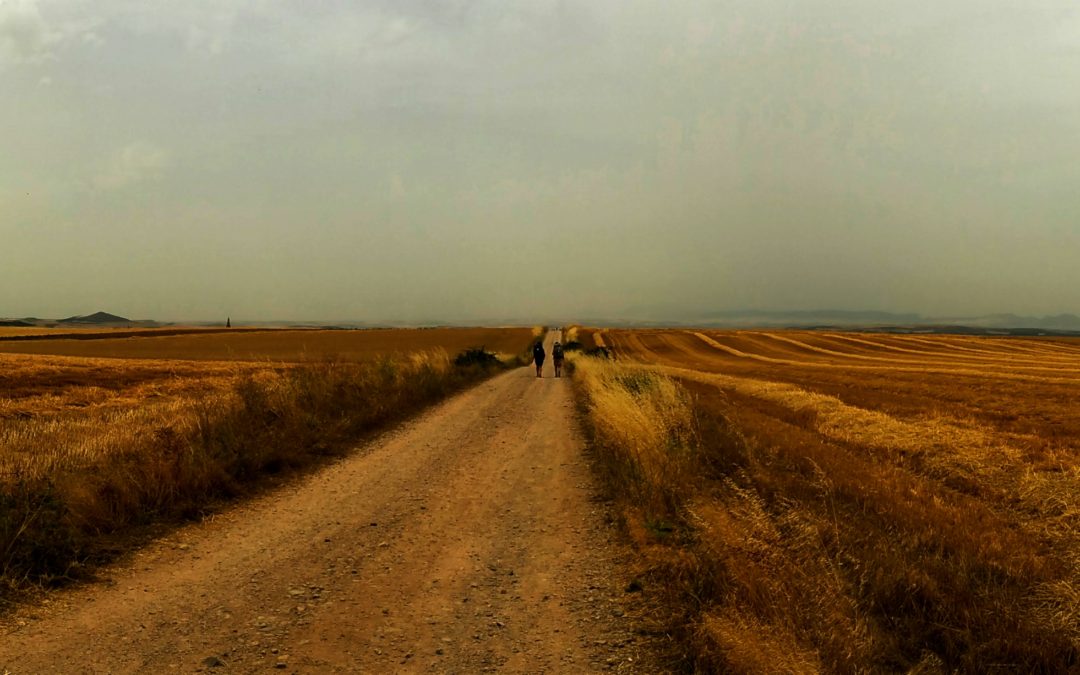 It was a clear morning and the moon was full as I walked down the windy streets of Ventosa alone. The Portland girls (who were in the bunks above and beside me) got up at 430 so I followed suit and left Cormac behind.

I soon found the little spray painted yellow arrows that marked the Camino and followed them out of town. The path led along vineyards, big wineries with warehouses, fancy signs, wine tasting.

Being alone in the dark by myself, I was a little apprehensive. Even though there were enough signs (either the yellow spray painted Camino arrows left by “the mad monk of the Camino” or the “official” tiles often laid into the street), I still wanted some reassurance, perhaps a magpie whispering in my ear.

And with my blisters still screaming invectives at me (even though I felt good, and strong) I didn’t need TVIBOMH (the voice in the back of my head) joining the chorus. So, I was hoping to see some indication that I was heading towards Najera the next town along the way, to assuage my insecurities and quiet the voice…

As the sky lightened and the moon became covered by clouds, I was pretty sure I was going the right way but still had that voice in the back of my head throwing out his fucking two- cents worth now and then: “You haven’t seen anyone, you must not be on the Camino”, “You may be on the path, but you’re going the wrong direction”….”You’re just a douche-nozzle like I keep telling you. Go back to the states…”.

I know that the voice in the back of my head is just trying to protect me from harm, from the unknown. I hadn’t consulted the map the night before so he had some foundation for telling me I was an idiot. And at that point in my journey, it wasn’t hard not to believe him.

I know the voice in the back of my head is a scared child throwing rude comments my way, his growth stunted at around 7 years old, but he can be effective none the less. I reasoned with him, and we made peace for the time being. I continued on…

Researcher Alison Flett argues that increasing our self-compassion may be the key to increasing our resilience by reducing this ruminative brooding. Why? When we accept our humanity and develop a non-judgmental stance towards our thoughts and feelings, it helps foster acceptance of our past failures.

Other past research on self-forgiveness reveals the same thing- that one of the effects of self-compassion may well be to reduce ruminative brooding — those repetitive negative thoughts about the past — and allow us to let go and move forward with our lives.

Four simple ways to quiet the inner critic are:

Read the Psychology Today article entitled “4 Ways to Stop Beating Yourself Up, Once and For All” here.

As the clouds dissipated and the sun began to make itself known, I decided to look at the GPS on my phone and discovered that the Camino was even on the map. Just as I was making sense of the map and confirming I was headed in the right direction, I heard a familiar laugh from behind me. It was Cormac, and he proceeded to launch into another donkey joke. What is it with the Irish and donkey jokes anyway?

A short story about The Voice in the Back of Your Head (read more short stories, etc on my medium page

I see how he works. He’s like an investigative reporter or a private eye. He analyzes, and assess every detail. Remember he’s only searching for the truth. He takes every word, every action of who he’s interrogating and tries to poke holes in their story. He questions everything, implies a sinister motive. He hates to be tricked, tripped up, made the fool. He doesn’t deal much with laughter.

He knows me well. He knows my weak spots, doesn’t care about my strengths. He’s working with me, but against me at the same time. His tactics are underhanded. He’ll take things he’s not sure of, things that there aren’t a grain of truth to, and spin them like they’re real. So real that you’re willing to believe them, to act on them, to use them as weapons to…protect yourself.

Protect you from what? Well, from getting hurt. The hurt you felt as a child when you were lost, away from your mother for the two minutes that seemed like a lifetime. The pain that settled in your stomach when she, gnarled hands and perfume, floated off. The heartache you endured when the first beautiful spirit that gazed into your eyes said goodbye.

But those were things that were cleaved with great zest and merriment long ago amidst the echoes of children laughing and mothers smiling in wonder at the incredible lightness of being while ignoring the cruel portent of a storm, blustering and bruised, approaching from the north.

He’s a bastard. But he can be reasoned with, even as he whispers invectives in your ear. But you have to be ready. And you have to be calm. And you have to methodically cast off the walls he has built, the defenses you have surrendered to, and the tears you hold onto. It’s hard. I know. Let them go.