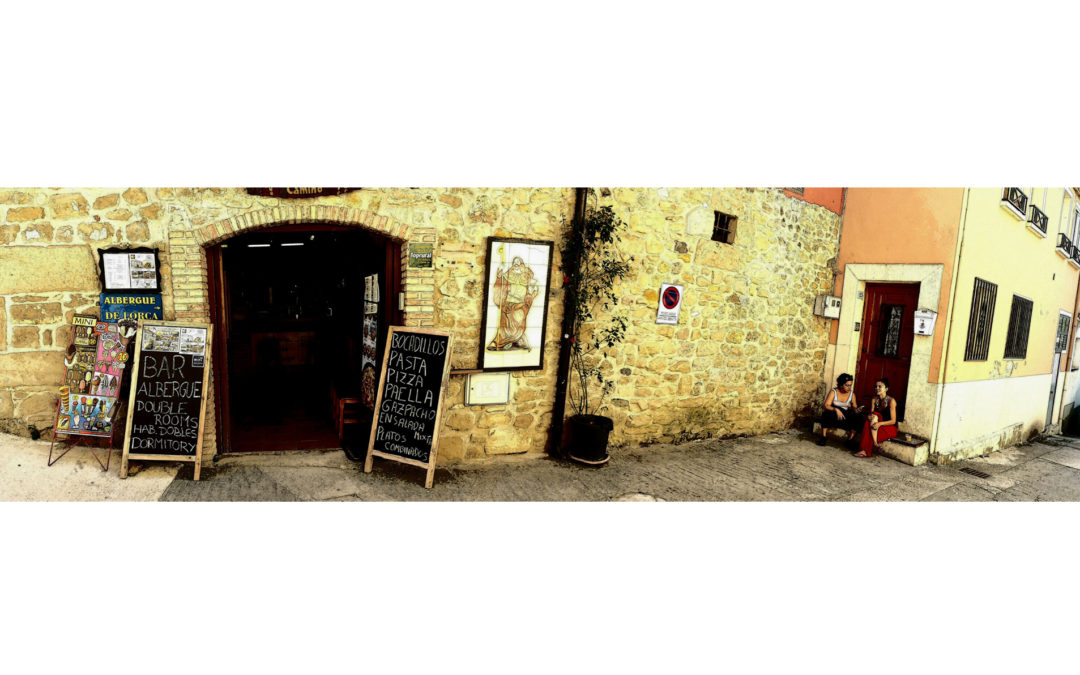 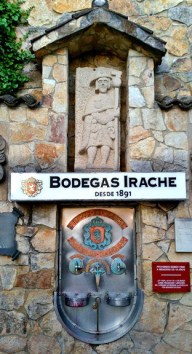 It was still dark out as I walked out the door of the auberge in Estella around 6:30 a.m. As I rounded the corner to the Camino, there were four guys standing around a lantern singing merrily in Spanish. It was Sunday morning and for a moment I felt almost holy, but it only took a little while for the usual feelings of self-loathing to creep back in. I certainly didn’t feel like one of God’s children, even if he does have a soft spot in his heart for the sinners and losers. Since it was Sunday I thought maybe their singing had some religious significance. Later I found out that these gentlemen gathered there every morning to serenade pilgrims on their way to Santiago.

Not too far out of Estella I stumbled upon a wine fountain. Yes, free wine. And it was right on the Camino! The next day would take me to Lagrono, which is the capital of Rioja, the heart of Spain’s wine country. I’m not usually a day drinker, but when in Spain…So I stopped for a siesta and a few photo opportunities. After leaving (begrudgingly) the Camino climbed some and crested, leading me down a path into a broad valley of rolling hills and wheat fields.

I walked for awhile with Ciara, a young Italian girl traveling with her three friends who were a few hundred yards off in the distance. The day was warming up as we fell into conversation- her broken English colliding with my thinking I could speak and understand some Italian since it’s similar to Spanish, sort of, and I know a little Spanish. She told me that she was on the Camino to make a new start. She didn’t go into details, but she seemed a little sad, and I got the impression it had something to do with a guy. I told her I too was making a new beginning; the difference was that she had her whole life in front of her and me, well…not so much. She laughed and agreed that things could be worse.

After awhile, I walked away from Ciara and her friends and was soon alone. My thoughts drifted to Ciera and her guy, and then to one of the reasons I was walking the Camino in the first place-

I met Amanda at a party for a business associate. She was the first woman I went out with after being separated and my divorce was trudging forward. In the original blog I posted to while walking the Camino I wrote:

“A week or so later we had dinner overlooking the crashing waves of the Pacific. A night of shooting stars, roving peacocks, and a thrilling reminder of what we had both long forgotten: that life can be good, and if you’re lucky, maybe you’re given the opportunity to mend the wounds of the past with the help of another”. (You can read the blog post in it’s entirety here)

One of the things I loved about Amanda was how we shared a lot of the experiences and emotions we had been through in our previous marriages. We had both been separated the same amount of time, had children, and had been through marriages that had turned hurtful during the last few years. I guess part of the reason we get together in this wild, cosmic dance is simply that it’s more enjoyable to experience life with someone. If you’re paying attention, you can learn things from the experiences you go through together. If you’re not, good luck.

Unfortunately, as we get older, things get more complicated. We carry too much baggage and harbor too many wounds from previous relationships. And these are the things that keep us from having the courage to be vulnerable. And if we’re not vulnerable, we’re not open to the feelings, the emotions, the experiences that make life worth living, and enable us to live life “Daring Greatly”.

The scars and callouses of love, and life, often cause us never to be able to love ourselves, another, or life itself fully. It’s like a scar that grows to heal a wound- except there’s no physical reminder, so it’s easy for us to think our emotional scars have gone away. Unfortunately, they’re still there, waiting to make themselves known under the right circumstances.

Whether a physical wound will leave a scar is dependent on a combination of biological processes that include the characteristics of the original wound and how it healed. It’s interesting that many times when our skin is wounded and the cut isn’t clean, and the healing conditions are not ideal, that we end up with a scar.

Analogous to this, perhaps how well emotional wounds heal is dependent on how much we were hurt, what we do to respond to the pain, and how we take care of ourselves after the fact. It seems though we can only understand this after we’ve suffered a few wounds, and are emotionally intelligent enough to recognize them for what they are: irrational emotional reactions to events from the past. It’s sort of a Catch-22. For some reason, they don’t fall away a few days later like a scab we got on our knee when we were a kid.

In a later post from my old blog with the distance that only time can provide, I looked back on my relationship with Amanda, which underscores what I’ve been writing about in this post:

“Looking back, I know that part of the reason we held each other so tight and felt such a deep connection is that we had both been through hell. When you find someone who’s been torn apart, battered, and dragged through the mud as you’ve been, you hold on tight because you’ve found someone who understands what you’ve been through, someone you can talk to, and if you’re lucky, someone who can show you how to love again.Standing there holding her made me feel, for the first time in a long while, like the man I had left behind so long ago.

Little did I know that some of the things that conspired to make that moment happen would eventually make her walk away.”

Looking back now, I wouldn’t change a thing even if I could. Love is like that.

“The credit belongs to the man who is actually in the arena, whose face is marred by dust and sweat and blood; who strives valiantly; who errs, who comes short again and again, because there is no effort without error and shortcoming; but who does actually strive to do the deeds; who knows great enthusiasms, the great devotions; who spends himself in a worthy cause; who at the best knows in the end the triumph of high achievement, and who at the worst, if he fails, at least fails while daring greatly…” — Teddy Roosevelt