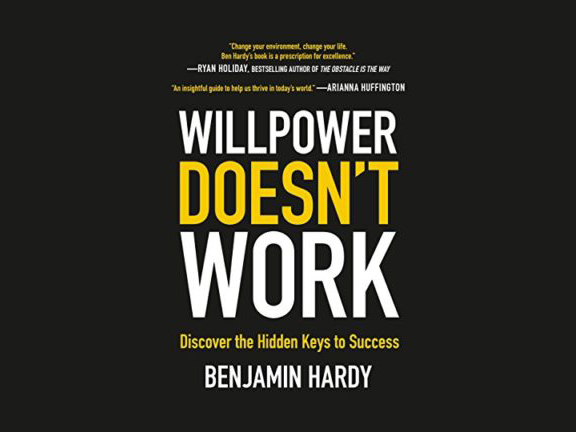 It sucks the life out of the old paradigm that has held us humans captive since before the Industrial Revolution. I’m talking about the paradigm provided to us by industrialized man and modern science that’s convinced us we’re static beings, which has lead us to the conclusion that the only thing that can break us free from our lives of quiet desperation is WILLPOWER- trying harder and harder until we’re entrapped in the rat race living stressful, unrewarding lives.

In this book, Benjamin Hardy demonstrates why willpower DOESNT work. In it, he uses science-based modalities (some new, some old but being shook to their foundations) that are being explored as modern science begrudgingly accepts the heretofore ignored importance of the mind/body relationship, to prove his point.

But unlike many, he has also “walked the walk.” In the book, he shares his own story which has been the perfect storm of events and has provided him with personal, experiential insights that underline the science that he uses to substantiate his claims.

His parents divorced when he was 11, and he barely stumbled through high school, being more interested in sleeping and World of Warcraft while surviving on Little Caesar’s pizza and Mountain Dew.

But he began to make a few small changes in his life, which eventually led him to attend and graduate college, get married, and become a professional writer. Finally, while attending a Ph.D. program at Cornell for Motivational Psychology, he began to study willpower and discovered what would become the underpinnings of this book- why willpower is not a very effective tool in helping us to change our lives.

Hardy uses these “new” disciplines (Brain Neuroplasticity, Epigenetics, Cognitive Neuroscience, Environmental Psychology to name a few) to show us how science is beginning to understand our behavior at a deeper level, which in turn can provide us with better tools to live fuller, richer, happier lives.

In “Willpower Doesn’t Work,” Hardy offers up many ideas, strategies, and tools to change our own lives based on his research. In addition, he exemplifies these strategies and tools with colorful examples from his own life and others that illustrate how these things can be applied to our own lives, in a straightforward, easy to understand manner.

Hardy’s personal story is the proof in the pudding. If what will be the result of this book (helping others to live better lives) doesn’t nominate him for sainthood, the fact that he recently adopted three siblings from the wrong side of the tracks that he had been providing a foster home for should.

Thanks, Benjamin Hardy, for this book and the example you set for the rest of us.